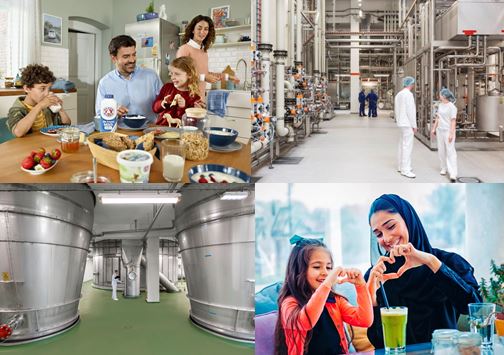 Hochwald discusses the future
Ochtendung/Thalfang, 6 December 2017"Facts change, opinions shift." With these words, Peter Manderfeld, Chairman of the Board of Directors of Hochwald Milch eG, welcomed the participants of the Future Forum. The fourth Hochwald Future Forum dealt with topics relevant to the future. The morning was devoted entirely to trend research and the conclusions to be drawn from it. It was quickly agreed that sustainability is not only a topical issue, but will also be demanded by consumers in the future. The speakers appealed to farmers as the experts in sustainability to actively communicate and present their performance - both in food production as well as in landscape management.One of the messages of the day for the approximately 300 members of Hochwald Milch eG in the context of the fourth Future Forum: Next year, Hochwald will work out a fixed price model in which farmers can participate voluntarily. The basic idea of the model is implementation via commodity futures transactions, which the cooperative handles centrally for the participating producers."Fluctuations in milk prices will remain a factor that will continue to have an impact in the future," said Peter Manderfeld, CEO of Hochwald Milch eG. "We are working on alternatives for our members to compensate or at least reduce these fluctuations." The planning reliability seems to be convincing. Three-quarters of the present milk producers, from Rhineland-Palatinate, Hesse, North Rhine-Westphalia and Saarland, could imagine participating in this fixed price model when asked.Dr. Heike Kuhnert from Land und Markt promoted the Milk sustainability module, which - once sufficient milk producers throughout Germany are actively involved - will form an excellent basis for further talks with politicians and consumers. "Today's consumers are demanding proof that we are working in a sustainable manner," Dr. Kuhnert explained. "The wealth of facts we're currently gathering make us confident in our reasoning."Otto Körner, head of the agricultural schools in Triesdorf, had already opened with a positive future scenario. Appreciation of agriculture and the producers will improve again over the next few decades. The reason is the ongoing population growth and the resulting increase in the importance of agriculture.Despite the challenges ahead, the other speakers were also positive regarding the future prospects, whether regarding animal welfare, which René Kramer from the German Raiffeisen Association in Berlin spoke about, or the inhibitor tests, which Dr. Christian Baumgartner from Milchprüfring in Bavaria presented again in detail. The market and consumers will undoubtedly continue to challenge milk producers - but these challenges can be met by the competence of the farmers and will also open up new opportunities.The future of the cooperativeFor a number of years now, forty young farmers have formed the Youth Advisory Board at Hochwald, which in the context of the fourth  Future Forum, clearly outlined its ideas for the future: More communication and information. In both directions. Because then the advantages of a cooperative organization can be fully exploited and adequate milk prices can be achieved even in difficult markets.Detlef Latka, CEO, reported on the successful implementation of the Hochwald 2020 strategy. "We're on schedule in all aspects." At the beginning of next year, the detailed planning for the alignment of the new dairy plant will be completed to such an extent that the actual site planning and implementation can begin.A view shared by the participating farmers. Similar to televoting, they were able to give their opinion on the presented topics via smartphone. The constructive critical contributions to the discussions also showed the unity within the cooperative. All the speakers agreed that today's challenges and those of the future can be mastered together.Anton Streit, Chairman of the Supervisory Board, was able to ascertain following six intensive hours: "If we dust us off and actively live our cooperative, we are well prepared for the constantly changing market. Then views that have shifted are no longer crazy views. Today and in the future."About Hochwald Foods GmbH:Hochwald Foods GmbH, headquartered in Thalfang, Rhineland-Palatinate, covers the entire spectrum of dairy products with production sites in Germany and the Netherlands. Under its umbrella, Hochwald bundles well-known brands such as Bärenmarke, Lünebest, Glücksklee, Elinas and Hochwald as well as private labels and international brands such as Bonny. www.hochwald.deContactKathrin Lorenz
Corporate Communications
Phone: +49 6504 125 129
Email: k.lorenz@hochwald.de
Share this article
back