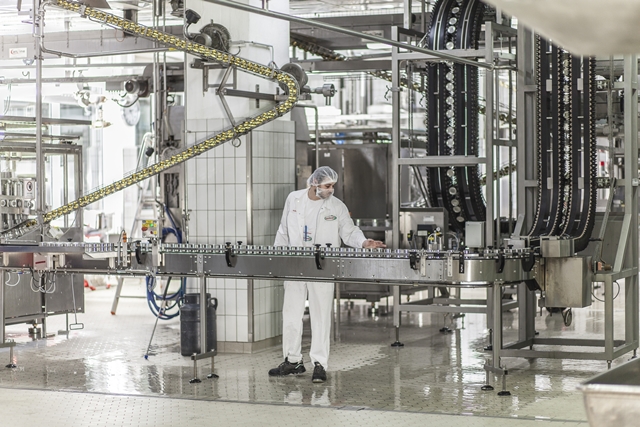 Strategy "Hochwald 2020"
Thalfang / Maria Laach, 27 June 2017 Hochwald laid the foundations for the strategy "Hochwald 2020" in 2016, a year in which the milk market was challenged even more than in 2015. The company wants to grow into an international market-oriented milk specialist. By a majority of 96%, the representative assembly voted to introduce a contribution to finance the reorientation. The owners have thus also paved the way for the implementation of the "Hochwald 2020" strategy. The aim is to once again achieve the strategic aim to pay a milk price above the national average. Fiscal year 2016 Although milk production grew at a slower rate than in previous years in 2016, it significantly exceeded demand, which was influenced by the falling demand from China, Russia and oil-exporting countries. For the first time since 2008, the previous dynamic growth of the global market stalled. Inventories increased and there was strong pressure on prices. Producer prices fell substantially in some parts of the world. In the financial year 2016, sales growth was influenced by the general development of the dairy industry in both the international and German market. Sales revenues have declined by 5.5% to €1,360.9 million in the reporting year (previous year €1,440.3 million). The price trend for dairy products came under pressure during the reporting year, which is the primary factor behind the decline in sales. Equity capital increased to €171.7 million following a new issue of profit sharing certificates. With €53.7 million, EBITDA are slightly above the level of the previous year. Investments in the reporting year amounted to €47 million, including investment in an RTD production facility in Bolsward. In addition, investments were made for further expansion of the cheese factory in Hünfeld and completion of the new plant for demineralised whey powder in Hünfeld and the associated sewage treatment plant. Producer prices for milk have fallen significantly since 2016. Compared to last year, average milk prices fell in Germany. The milk price at the parent cooperative association has also declined in the reporting year, in line with the previous year forecast. At 4.0% fat and 3.4% protein content, the unit price amounted to €0.2892/kg, including S-class and quantity surcharges, as well as supplementary payments and VAT. Development 2017 The milk markets in the EU and in Germany stabilised early in 2017. While prices for fat continue to rise, the market for skimmed milk powder (protein) remains difficult. The downturn in raw material volumes in the dairies in the EU 28, which has been observed since June, 2016, continued in 2017. The Hochwald-group is now focussed on implementing the “Hochwald 2020" strategy, and with their decision to increase the capital, the representatives paved the way for it. Detlef Latka, Chief Executive Officer: "Hochwald group sales will increase in 2017. We are doing our utmost to implement the "Hochwald 2020" strategy, which will sustainably improve the milk price for the members of our cooperative." The implementation of the "Hochwald 2020" strategy is based on the consolidation of our cooperative model. The goals "social responsibility, technology optimisation, focussed internationalisation, portfolio development, as well as organisation and governance" are integral parts of the reorientation of the Hochwald-group. The necessary investments will be partly financed through a capital increase in the form of a contribution voted on by the representative assembly. It will start with retaining some of the milk revenue supplementary payment for 2016. Elections to the Board of Directors and the Supervisory Board of Hochwald Milch eG The Supervisory Board of Hochwald Foods GmbH elected Supervisory Board member Matthias Bug as the new chairman as per 1. 7. 2017. Chairman Hans-Jürgen Sehn will retire from the Supervisory Board on the same day. He has been active in the cooperative for over 30 years in an honorary capacity and has been chairman of the Supervisory Board of Hochwald Foods GmbH since 1998. Facts and figures Contact: Hochwald Foods GmbH
Kathrin Lorenz
Corporate Communications
Tel.: +49 6504 125 129
Email: k.lorenz@hochwald.de
Share this article
back