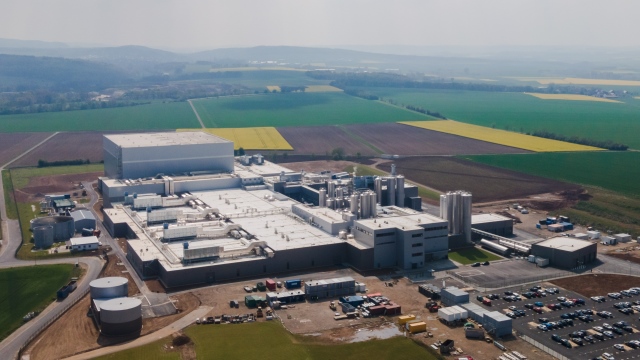 Hochwald has opened the dairy plant of the future, today

Exactly three years after construction officially started, Hochwald has opened their new plant in Mechernich. Together with the Secretary of State for Agriculture of North Rhine Westphalia, Dr Heinrich Bottermann, and the Secretary of State for Agriculture of Rhineland Palatinate, Andy Becht, many guests were present to celebrate the ceremonial handing over of the keys to the plant. Hochwald has invested 200 million euros in the new location, where around 250 employees will turn 800 million kilogrammes of milk per year into milk products, such as long-life milk, long-life cream, long-life milkshakes and condensed milk.

Commercial production at the new location started in January and Hochwald gradually re-located production from the Erftstadt plant to Mechernich. The plant is setting new standards in terms of automation and digitalisation. All processes are perfectly matched with each other and extensively automated and digitalised. This makes the Hochwald plant the most up-to-date dairy plant in Europe.

“Under the motto ‘Forwards with courage’, we set our strategic direction in line with the current and future requirements of the market five years ago”, explained Detlef Latka, CEO of Hochwald. “A core element of this was the construction of a highly efficient and future-orientated plant – precisely what we are opening today. I am proud of the entire team of people who have made all of this possible in the last few years. Mechernich signifies the start of a new phase of development for Hochwald”.

Hochwald will process around 800 million kilogrammes of milk at its new location in a total of 17 different bottling plants. Future growth has already been taken into account as this capacity can be extended in the next few years through additional bottling plants, meaning that Hochwald can open up further options.

“In many ways, the Mechernich plant is a flagship project”, explained Peter Manderfeld, chairman of the Hochwald Milch eG cooperative. “It demonstrates the resolve and capacity to act that a cooperative has. For us as milk producers, it ensures milk production in the region and contributes to a good milk price”.

On the 21.5-hectare property, around 60,000 square metres of floor space have been created and the 17 bottling plants can produce up to 1.4 billion packages per year. These numbers demonstrate the scope of the project. Dr Heinrich Bottermann, Secretary of State for Agriculture of North Rhine Westphalia, believes: “North Rhine Westphalia is a great location for the food industry. We are happy to see that the new dairy plant is helping to sustain it. Milk can be produced very sustainably and efficiently here”. Andy Becht, State Secretary in the Rhineland-Palatinate Ministry for Economic Affairs, also highlights the significance of the investment for the dairy industry as the backbone of agriculture in the middle mountain regions: “The dairy industry as a whole plays an essential role in the Eifel region. As it preserves and maintains beautiful cultural landscapes, it also creates the conditions that other sectors rely on, such as rural tourism. My ministry continuously works towards the ongoing development of high-quality and powerful regional milk production.” The representatives from both State governments, as well as the mayor of Mechernich, Peter Schick, congratulated the team of Peter Manderfeld and Detlef Latka for the decision to build the plant and the successful implementation of the project.

The first stone was laid in May 2019 and now, just three years later, a modern dairy plant stands in the green field. In explaining the initial phase of the project, Thorsten Oberschmidt, Hochwald COO, said, “Planning the facility as a new build was both a great advantage and one of the main challenges of the project. An advantage in the sense that we could perfectly picture the resource flows in the new buildings and a challenge because with such an investment, we obviously wanted to retain a certain flexibility for future market developments”.

The result is clear as the 200 guests at the opening ceremony could confirm. The visitors were impressed by the design and the organisation of the production on a tour of the plant. Controlled digitally using efficient procedures, the milk is processed from delivery to shipping by over 1,200 of the total of 2,300 cooperative milk suppliers of the Hochwald group.

The new Mechernich plant in numbers:

Find pictures, movies and texts via the following links: