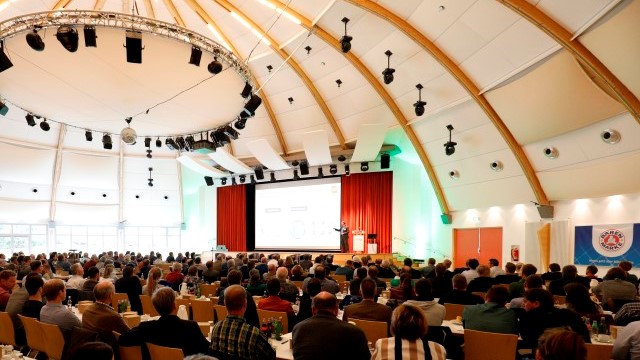 Projections for the future are always associated with uncertainties, as the organisers of the Hochwald Milch eG. Future Forum know. However, strategic engagement with future-related issues has over time become a positive and productive tradition for farmers and members of the cooperative. This is already the fifth time the Hochwald Future Forum has taken place at Ochtendung’s community hall. For this year, the cooperative's Youth Advisory Board, which was instrumental in organising the event, focused on the relationship or intersections between market, society, and agriculture, and proved their determination to actively explore different points of view. In addition to speakers such as Christian Däumler from the German Society for Consumer Research (GfK), and Karin Monke from the German Dairy Industry Association, other contributors who addressed the audience of around 300 producers and management executives included Martin Hofstetter from Greenpeace and the practical philosopher Markus Melchers.  Advertising expert Peter Berndgen, and Dr. Bianca Lind from the German Livestock Association, rounded off the series of presentations with practical tips. First, farmers were given an overview of the latest market research findings and emerging trends. Christian Däumler, for example, used his data to powerfully prove the decline of meals that areeaten at home. The tendency to eat out has increased significantly over the last 15 years, which has caused corresponding changes to private consumer demands in food retail. The figures of the GfK also demonstrate the continuing disparity between the opinions and attitudes expressed by consumers in surveys and the actual demand seen in retail. The price of products continues to dominate the chilled section. After this insight into the German consumer market, Karin Monke provided a perspective on exports. In the summer of 2019, a slight decrease in global milk production was recorded for the first time since 2013, with significant changes within the EU during the same period. These are important figures, considering that 49 % of German milk is exported. Despite existing trade barriers, such as current Russian sanctions, German-produced milk is able to achieve success on the international market. The reason for this is the high quality of raw milk and the high standard of processing. “Made in Germany” may not (yet) be cost efficient but is a key factor for market access. It remains uncertain how Brexit will affect market conditions. Next on the agenda was a speaker with a rather unfamiliar perspective. Markus Melchers raised questions regarding animal ethics from a philosophical point of view and called for additional training for farmers. Questions of animal ethics have become a key issue in society and need to be addressed from an agricultural viewpoint. Controversy and insults, used by both sides of the argument, don't produce change. Animal ethics should be as much of an issue within agricultural education as it is in training, he urged. Open, yet not confrontational, is the best way to describe the presentation given by Greenpeace’s Martin Hofstetter. In front of an initially reserved audience, he outlined the current discussion around milk and how Greenpeace plans and carries out its campaigns. The Agricultural Engineering graduate impressed with his serene and objective manner, even though differences of opinion in this matter continue to exist. From his own perspective, he clearly voiced the reasons and issues for why milk producers could become the focus of attention over the next 20 years. For example, in terms of CO2 emissions. The agricultural contribution to this may currently only be around 7 percent, but this will rise sharply in the next few years due to the measures taken in other areas, for example the withdrawal from brown coal power production. The pressure for measures in the dairy industry, or agricultural sector in general, will increase as a result. He left a second question open: Is the entire sector just facing changes, or are disruptive developments setting in? He shared that he could already see the first signs of this in the meat industry. Practical farm PR was the focus after lunch. Peter Berndgen sees this as a decisive factor for agricultural success. The level of confidence in the agricultural sector is still very high, according to surveys on professions that are trusted. This trust needs to be reinforced through positive, active communication. Berndgen is convinced that the entire industry would experience substantial communication-based momentum if 15 - 20 % of agricultural businesses actively communicated. Dr. Bianca Lind from the German Livestock Association took a similar approach. Because positive stories exist and are there to be told. For example, virtually every dairy cow farmer has a cow in their barn that produces 100,000 litres over its lifetime, or cows that are over ten years old. The association has also provided statistics which show that the health of animals has improved in recent decades alongside the increased yield of milk. Her message to all Future Forum participants was to seek contact with others. Actively and on a regular basis, not just when facing criticism. The questions asked by farmers in the concluding round of discussion, together with all of the day’s speakers, illustrated yet again how seriously future-related issues are taken. As part of his welcome speech, Board Chairman Peter Manderfeld had asked his audience in jest, whether anyone had ever wished that they could launch Greenpeace representatives into outer space. However, in her closing words, Klara Wolf, Youth Advisory Board Spokesperson, ascertained that most of those favouring rocket launches had now changed their mind: It’s about an honest and in-depth dialogue. For a positive future for agriculture and for human beings. About Hochwald Foods GmbH:
Hochwald Foods GmbH is based in Thalfang, Rhineland-Palatinate. Its production facilities in Germany and the Netherlands cover the entire spectrum of dairy products. Hochwald owns well-known brands such as Bärenmarke, Lünebest, Glücksklee, Elinas and Hochwald, as well as trademarks and international brands such as Bonny. www.hochwald.de Contact
Kathrin Lorenz
Corporate Communications
Tel.: +49 6504 125 129
Email: k.lorenz@hochwald.de