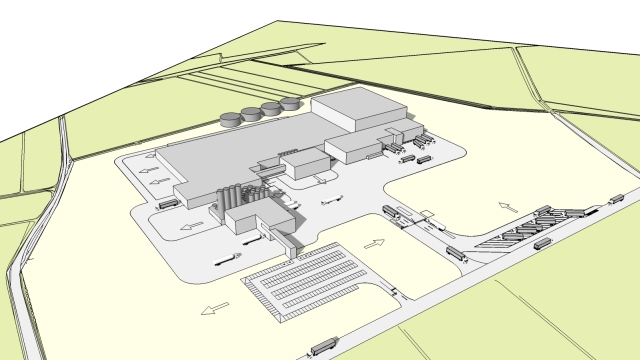 4th June, 2018Obergartzem/Thalfang/Erftstadt - The Hochwald Cooperative Group with its head office in Thalfang, in the Rhineland Palatinate region, is planning a new production site for long-life dairy products in North Rhine-Westphalia. An extensive analysis of the production network, the milk collection area and the distribution channels revealed that the optimum location for the new site, in which around 800 million litres of milk will be processed by more than 250 employees into high quality dairy products, is within commercial area III in the town of Mechernich in Obergartzem.

Negotiations between the company and the town reached a positive conclusion during the Corpus Christi public holiday, according to the deputy mayor, Thomas Hambach. The other options Hochwald has considered are no longer contenders. According to the documents from the meeting, the project will be presented to Mechernich town council’s structural funding committee next week. Should the council give their approval, which is expected, the land purchase agreements could be signed as soon as the end of next week. The unpasteurized milk that will be processed in the new facility stems from members of the cooperative. Approximately 1,250 farmers of the total 3,000 supplier members are within the catchment area of the new site. Detlef Latka, Chief Executive Officer of Hochwald Foods GmbH explains, “The location offers favourable conditions for our planned project. We aim to build a modern and highly efficient site on the grassland.”

The construction of a new dairy is part of a long-term strategy. With the Hochwald 2020 strategy, the company is continuing its development to become an international, market-orientated specialist of dairy products. Hochwald has proven that it can accomplish such projects as is demonstrated by its activity in Hünfeld, in the Hesse region of Germany. After only two years of construction, a new site was opened there in 2016 for the production of primary ingredients for the baby and children’s food industry. Thorsten Oberschmidt, Hochwald’s Chief Operating Officer, affirms, “We are also planning to have the site in Obergartzem working within approximately two and half years of the start of construction.” According to the town council’s deputy mayor Thomas Hambach, the arrival of a prominent dairy processing company will be of great benefit to Mechernich as well as its surrounding district of Euskirchen. Because the new Hornbach dairy is bound to attract further firms and suppliers to the area. Mayor Dr. Hans-Peter Schick and his deputy expressed their elation regarding the initial creation of more than 250 jobs in the town of Mechernich. Even though a large proportion of these workers are already employed by Hochwald at the Erfstadt site, additional jobs in the region will surely follow and some employees may well be drawn to settling here.

About Hochwald Foods GmbH:
Hochwald Foods GmbH is based in Thalfang, Rhineland-Palatinate. Its production facilities in Germany and the Netherlands cover the entire spectrum of dairy products. Household names such as Bärenmarke, Lünebest, Glücksklee, Elinas and Hochwald, as well as trademarks and international brands such as Bonny, are part of the Hochwald family.